And "they" will not have an honest debate (or any debate at all)
about whether The American people want the same thing.
( a new "system" / new governmental structure) ie. Communism,
Marxism

(which is interesting in it's self) the two different groups that are
bucking for more money, power and payback or if you prefer
retribution. - ie. Rich whites and Marxist blacks that are not
of any kind of… Continue 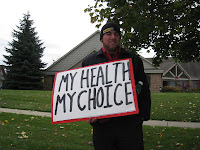 Grassroots in Michigan organized and was joined by Tea Party of West Michigan Southwest MI Tea Party Patriots and other patriots from across Michigan to protest and deliver a Pink Slip to liberal tool Debbie Stabenow with a message, "we will do everything in our power to make sure Sen. Stabenow does not return to office in 2012" Debbie Stabenow… Continue

Last week I wrote letter to our Senator Glen Anderson asking him his thoughts on the Michigan Fair Tax plan and his response was to send me a hyper link to a tax blog on the MSN money network written by Jeff Schnepper.

I offered to sit down with Mr. Anderson and offer my… Continue

Seniors are NOT stupid.

An Urgent Message from the League of American Voters

Most Americans Don't Want It.

Dick Morris Has a Plan to Stop Him.

Yesterday, the Senate Finance Committee voted to back the "Baucus Bill" and send it to the full Senate.

This appears as a defeat for our side, but it isn't by a long shot.

In fact, we… Continue

Tired of getting those Democrat/Republican surveys? The party sending it makes you think you are soooo important by printing on the envelope "Confidential". They make you feel so special - they are actually seeking YOUR opinion on what needs to be done during this ailing economy. They value your input in regards to what is most important to you.

So you spend time, real quality, thought provoking time in carefully answering the questions put to you. After working through the survey… Continue

Town Hall Tuesday in Okemos on Transfer of Terrorists to Michigan

The following is from an email sent to me from the Media Research Center. I would love to see Harry Reid defeated in his next election. What a snake.

Brent Bozell appeared on “Fox & Friends” this morning, and dropped a health care bombshell broken by MRC’s own CNSNews.com …

And the most… Continue

Check out and take part in this website. It is a great idea!

I found out about this website and find it a wonderful answer to the willful ignorance coming out of Washington. I have included the website address for anyone to cut and paste. Below is an explanation from the website's founder, Wayne Ostrander.

Pick a piece of legislation or two if you feel ambitious today
use the last three of your SS# or any number that comes to mind and download the pdf of the legislation. Read… Continue

SAVE OUR HEALTHCARE ‘TEA PARTY’ RALLY

UThe chaplains said that many soldiers had lost their desire to help Afghanistan. “All they want to do is make it home alive and go back to their wives and children and visit the families who have lost husbands and fathers over here. It comes down to just surviving,” said Captain Masengale.

“If we make it back with ten toes and ten fingers the mission is successful,” Sergeant Hughes said.

“You carry on for the guys to your left or right,” added Specialist… Continue

Sheriff Joe Arpaio tells the Feds to go to hell

Congress: Senate Majority Leader Harry Reid and House Speaker Nancy Pelosi have been asked repeatedly to put the proposed health care bill on the Web. They've refused. Do they have something to hide?

Even Democrats have asked their leadership to put the bill online at least 72 hours before a vote, so that any American can read the… Continue

GOOD NEWS ! IN GOD WE TRUST

Please help us get this information into the hands of as many people as possible by forwarding it to your entire e-mail list of family and friends.

Congressman says YOU and your AFA made the difference!


When the $621 million Capitol Visitors Center opened last year, somebody was conspicuously absent at the opening… Continue

The Absence of Strategic Thinking - ACT for America


The Absence of Strategic Thinking

Here's a free weekly report of how our representatives are voting on issues important to us. Sign up for Megavote, it's free! Here's the link: http://capwiz.com/weeklystandard/home/ Sorry I can't get these to hyperlink.

Mark Schauer co-sponsored a bill, HR 554, that would require any non-emergency bills to be posted online for all to read 72 hours before a vote is taken (you know, like that transparency Obama talked about during his campaign). Nancy Pelosi is trying to block this from coming to the floor for a vote. There is a discharge petition to go around her and immediately bring the bill to the floor for a vote. It only needs 36 more signatures out of 218! Though Schauer has co- sponsored the bill, he… Continue

The following is a copy of an e-mail I received regarding a great event this Tuesday:


Capitalism Without Guilt: The Moral Case for Freedom

A talk at the University of Michigan

Who: Dr. Yaron Brook, president and executive director of the Ayn Rand Institute


What: A talk arguing that, in stark contrast to the pervasive view, selfishness and capitalism were not only not responsible for the financial crisis, they are, in fact, what’s needed to… Continue

Someone posted Life Chain on the yahoo site and thank you for the reminder !!

Abortion is not health care and as Mother Theresa said: " It is a poverty to decide that a child must die so that you may live how you wish.."


When you look at the website www.lifechain.net and click on Michigan, there are many locations to go and carry your life sign - I was so happy to see that there's one in my town just a few miles away.