I attended a (Tue. Sep. 21) "'Freedom To Work' Legislation discussion". Here is a brief report of some of what was discussed...


What the key presenter (from: Union Conservatives) wanted to make clear from the start was that the issue is NOT anti-Union, nor Union busting; as he IS a UAW member currently; but was/is about Freedom Of Choice (further, Freedom of Association / U.S.Constitution Amendment 1 (extended SCOTUS rulings)). The Freedom (Individual Liberty) to Join, or not, and to Pay, or not! An actual "choice" or Freedom, NOT extortion and forced participation (forced Union-ism). This will NOT infringe on the Right to Unionize nor push de-certification of existing Unions (all those statutes remain, unchanged and in effect, as was/is - unlike what Unions want with Card-Check to make it easier to Force Unionize with a minority; non-secret - pressured - balloting).


The Left (Liberals/Progressives) insist that every woman be given the choice as to whether to abort an unborn child, but they do NOT want you to have your Constitutional Right (Freedom of Association) to CHOOSE whether or NOT to join a Union of your own free will and inclination; or NOT! The Union Leadership wants to continue (what they obtained about a half-century ago) their; monopoly within some businesses and forced dues collection; forced Union membership -- NEVER to compete in the realm of ideas as to why one would want (choose) to join their Union. This is a violation of your Rights (USC First Amendment; Freedom of Association, or to NOT associate).


Many know about the Boeing/NLRB battle over SC plant/jobs, but few know that Michigan could have had those jobs if it had moved on "Freedom To Work" before. Boeing visited, and considered, refurbishing a Willow Run, MI. (see story: Michigan bids for Boeing plant) plant for its Dreamliner, but opted for South Carolina because of its "Right To Work" status.


It doesn't take a Rocket scientist or Statistician to understand that Michigan is on the losing end of the Jobs market, and is in steep decline. One just has to talk to Family, Friends, and/or Neighbors, to find stories of those who have had to take up roots from Michigan to go somewhere else in order to have meaningful (if any at all) employment. Here are those FACTS that back up that anecdotal evidence...

Over the past decade Right To Work (RTW) states grew faster in nearly every respect than Forced Union (FU) counterparts**:


See Michigan Freedom to Work Coalition
for even more depressing, but not surprising, numbers.

Wonder why some States went Blue in 2008? These statistics explain that if you factor in the [despite (R) 2010 gains] Exporting/Expanding BLUE-ism process, as folks escape Forced Union States for Right To Work States.

A brief aside: I am glad for the change in terms to "Freedom To Work" as the old "Right To Work" sounded much more like a Union leadership mentality (SOCIALIST) term suggesting someone has the RIGHT to their job no matter how lazy or horrible they are at their job (think Teacher tenure)!


"Freedom To Work" Legislation does NOT yet have a Bill number, but is easily identifiable by its name.

The following book was highly recommended: "Free Choice for Workers: A History of the Right to Work Movement" ....


As always, Regards from JLenardDetroit from "NoMoTown (The MOTORless CITY)"
Remember - "Liberals - looking to do for America, what they've done to Detroit. - Destroy it!"
"I think, therefore I am Conservative"
"Conservative by choice, Republican by necessity"
"The more things 'hope and change' the more they stay the same"
closing quotes attributable to (me) JLenardDetroit

cross-posted: "Rattle With Us" Tea Party and RedState

Remember what the Union's LEADERSHIP thinks of you:
James Hoffa Jr. - Detroit - Take these SOB's out
http://youtu.be/VfzMsD2njMc/

DECEMBER 2011 UPDATE: Due to RECALL threats and other pressures, it has come to my attention that some are waining on their "FREEDOM TO WORK" legislation support and it is in danger of being TABLED LONG TERM. Call you Representatives and pressure them from OUR PERSPECTIVE that it must NOT be allowed to be forgotten/dropped!!!

No-one should expect anything less of the Leftist loons (re: Dennis' comment: Mr. Bowman managed to get a letter in the Detroit News editorial section. Read the comments if you want to raise your blood pressure. www.detnews.com/article/20111206/OPINION01/112060316).... Terry should have included, at least, the basic fact that F2W (Freedom, or Right, To Work) States pay (spending cash, pay over COL (Cost Of Living)) is greater than in FU (Forced Union) States; as well as briefly touched on other advantages to MI becoming the next F2W State.

Mr. Bowman managed to get a letter in the Detroit News editorial section. Read the comments if you want to raise your blood pressure.

Comment by Joseph M Lenard (JLenardDetroit) on November 22, 2011 at 5:27pm
Michigan Freedom To Work:
1.The Labor Freedom Movement is picking up momentum in several Midwestern states. Read more.
2.What is the real story about lost manufacturing jobs in America? Have unions played a part? Read more.
3.Union makes home care providers join and pay dues…for caring for their OWN children. Read more.
4.Heritage Foundation Study: Right to Work increases jobs and choices. Read more.
5.Union tries to intimidate small paving company into organizing. Read more.
6.Right to Work is not just about jobs. It a “social” issue as well. Read more.
To contact us, please send an email to info@mifreedomtowork.com or to read more on those items listed above visit www.mifreedomtowork.com.

Contact info for a conservative organization for union members:

Comment by Joseph M Lenard (JLenardDetroit) on September 25, 2011 at 10:52pm
You might assume any candidate with an "R" by their name vying for the chance to face off against President Barack Obama in November 2012 would be eager to support Right to Work "loud and proud."

However, you know what they say about assuming.

While most of the candidates talked a good game during the debates so far to leave voters with the impression they fully support Right to Work, the devil's in the details.

To end President Obama's radical forced unionism jihad and start to turn this nation around, we need a Republican nominee who will not only promise to support specific Right to Work legislation but will be a leader on the Right to Work issue.

Not a politician who will kill the Right to Work issue by letting it fall to the wayside once elected.

The acid test will be whether they are willing to answer our 2012 National Right to Work presidential candidate survey in writing.

My staff just sent out the surveys to each of the GOP candidates for President. 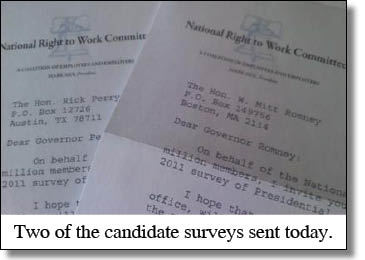 The National Right to Work Committee is a nonprofit, nonpartisan, single-purpose citizens' organization dedicated to combating compulsory unionism through an aggressive program designed to mobilize public opposition to compulsory unionism and, at the same time, enlist public support for Right to Work legislation. The Committee's mailing address is 8001 Braddock Road, Springfield, Virginia 22160. The Committee can be contacted toll-free at 1-800-325-7892. Its web address is http://nrtwc.org/

Not produced or e-mailed at taxpayer expense.

To help the National Right to Work Committee grow, please forward this to a friend.

Comment by patriotm1 on September 22, 2011 at 5:35am
"Right to Work" should be a right in all 50 states.  Companies and government agencies forced to withhold union dues for the unions is an atrocity.  It costs everyone but the unions -- go figure.